Press enter to begin your search

The Tetagouche property comprises approximately 16,000 hectares in the heart of the Bathurst Mining Camp in northeastern New Brunswick. The property contains 6 historic massive sulphide deposits (non 43-101 compliant) and numerous base-metal occurrences, largely explored during the 1960’s and 1970’s.  In addition, the the Company holds the most significant silver deposit in the district, California Lake, which occurs with a trend of over 35km that has the potential to host large scale silver rich hydrothermal systems.  Programs in 2021 and 2020 will focus on these silver rich systems that are similar to the Big Silver Project in Maine that occurs in a similar sequence of rocks.

Brunswick No. 12 is one of the world’s premier massive sulphide deposits with a global reserve (including those previously mined) of at least 100 million tonnes at a grade of 3.65% Pb, 8.99% Zn and 100 g/t Ag. In addition to Brunswick No. 12 there are over 30 other Volcanogenic Massive Sulphide deposits in the Bathurst Mining Camp, some of which have been previously mined, attesting to its world-class endowment and mineral potential. Currently, there are 2 development projects ongoing in the Bathurst Mining Camp; potential reopening of the Caribou mine and mill complex by Trevali Mining Corporation, and an ongoing prefeasibility study at the Murray Brook deposit being completed by joint-venture partners Votorantim Metals and El Nino Ventures Ltd. 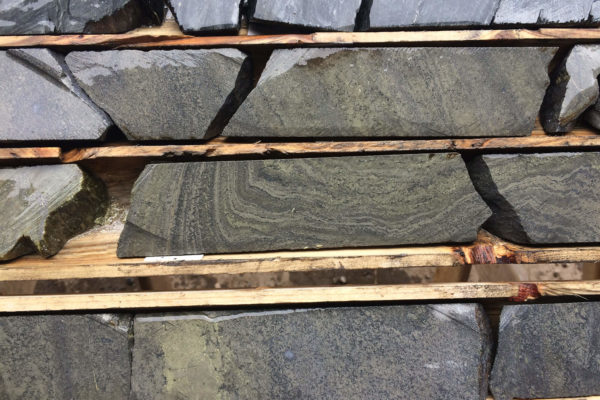 The 100%-owned Tetagouche property comprises greater than 16,000 hectares and is located in the heart of the Bathurst Mining Camp of north-eastern New Brunswick. The centre of the property is located approximately 30 kilometres northwest of the Brunswick No. 12 Zn-Pb-Ag-Au deposit and 25 kilometres west of the City of Bathurst. The Tetagouche property can be explored year-round and at reasonable cost given its easy road access and proximity to infrastructure.

The Orvan Brook deposit was discovered in 1938 and is the earliest massive sulphide discovery in the planned work area. The earliest assessment reports for the planned work area date back to 1954 and intermittent work has been carried out since that time. The Tetagouche Exploration Company drilled 28 holes at the Orvan Brook deposit in 1938-1939 and subsequent drilling was carried out by the American Smelting and Refining Co., New Calumet Mines Ltd., Little Lac Gold Mines Ltd., and Brunswick Mining & Exploration/Noranda Exploration. The Armstrong A and B deposits and the Rocky Turn deposit were discovered by Anaconda American Brass in 1956-57 and had been held by Anaconda until the late 1980’s when they were taken over by Caribou New Brunswick Mining and were subsequently acquired by East West Caribou Mining, Breakwater (Canzinco), Blue Note Mining, GeoVenCap and Wolfden Resources. Numerous other companies (Cominco, Conwest Exploration, Elmtree Resources, Falconbridge, Fundy Bay Copper, Golden Bay Resources, Mattagami Lake Mines, Noranda, Northeast Exploration Services, Sevogle Exploration, Sharpe Energy & Resources, Stratmat and Sturgeon River Mines) and several prospectors have also reported exploration programs on properties held within the planned work area. 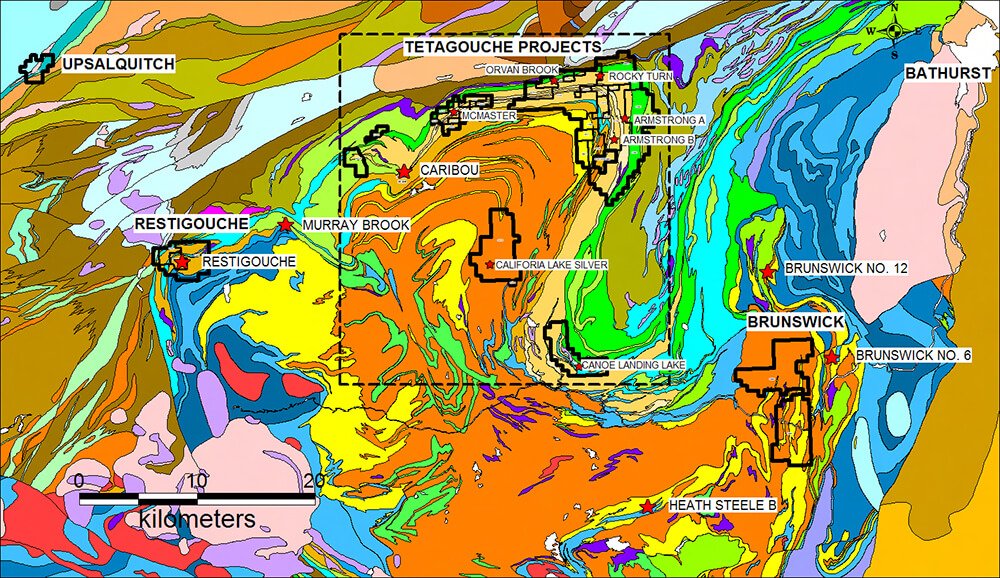 The following is a brief description of the geological setting and nature of the 6 historic massive sulphide deposits located on the Tetagouche property.

The Orvan Brook deposit comprises several parallel lenses of fine-grained disseminated to massive banded sulphides, traced over a strike-length of 2.3 kilometres and to a maximum thickness of about 5 metres. The deposit is hosted within feldspar-phyric sericite tuff and graphitic shale of the Spruce Lake formation. Historic resources are reported as 2,690,000 tonnes grading 5.90% Zn, 1.7% Pb, and 0.40% Cu, 72.0 g/t Ag and 1.0 g/t Au.

The Armstrong A deposit consists of two conformable lenses of fine-grained, massive lenses of banded pyrite, chalcopyrite, sphalerite and galena. The host rock is chlorite sericite schist with feldspar and quartz augens of the Ordovician Spruce Lake formation. The deposit sits on the north-south limb of the Tetagouche antiform where the 2 lenses strike north to south and are approximately 91 metres apart. A historic resource for the deposit is estimated to be 3,377,000 tonnes grading 3.26% Zn, 0.42% Pb, 0.29% Cu, 25.37 g/t Ag and 0.41 g/t Au.

The Armstrong B deposit comprises disseminated to massive sulphides hosted within a mixed sequence of ash, feldspar-crystal and lithic-lapilli tuffs assigned to the Spruce Lake formation. It also sits on the north-south limb of the Tetagouche antiform. Intense feldspar-destructive chloritic and sericitic alteration is conformable with the mineralization and is prominent in the footwall to the deposit. A historic resource for the deposit is reported as 488,583 tonnes grading 1.10% Zn, 0.23% Pb, 0.67% Cu, 13.71 g/t Ag and 0.10 g/t Au.

The host rocks for the Rocky Turn deposit are quartz-sericite and sericite-chlorite schist of the Spruce Lake formation. The deposit has been described as a layer of banded pyrite-sphalerite-galena with minor chalcopyrite over a strike length of 183 metres and to a vertical depth of 150 metres. The historic resource for the deposit is reported as 131,000 tonnes grading 8.43% Zn, 2.69% Pb, 0.28% Cu, 101.0 g/t Ag and 3.10 g/t Au.

Sulphides of the Canoe Landing Lake deposit are hosted in graphitic shale and wackes at or near the contact with overlying mafic volcanic and epiclastic rocks, all assigned to the Canoe Landing Lake formation. The sulphide lens has a sheet-like morphology with a strike-length of 1200 metres, thickness of 1-18 metres and a down-dip extent of greater than 900 metres. A historic resource for the deposit is reported as 22,800,000 tonnes grading 1.82% Zn, 0.64% Pb, 0.56% Cu, 32.23 g/t Ag and 1.17 g/t Au.

The McMaster deposit comprises bands of massive and disseminated pyrite and lesser chalcopyrite hosted within chloritic sedimentary rocks of the Spruce Lake formation. The historic resource is reported as 250,000 tonnes grading 0.75% Cu. The strike-length of the deposit is approximately 175 metre and averages about 5 t0 6 metres in width. 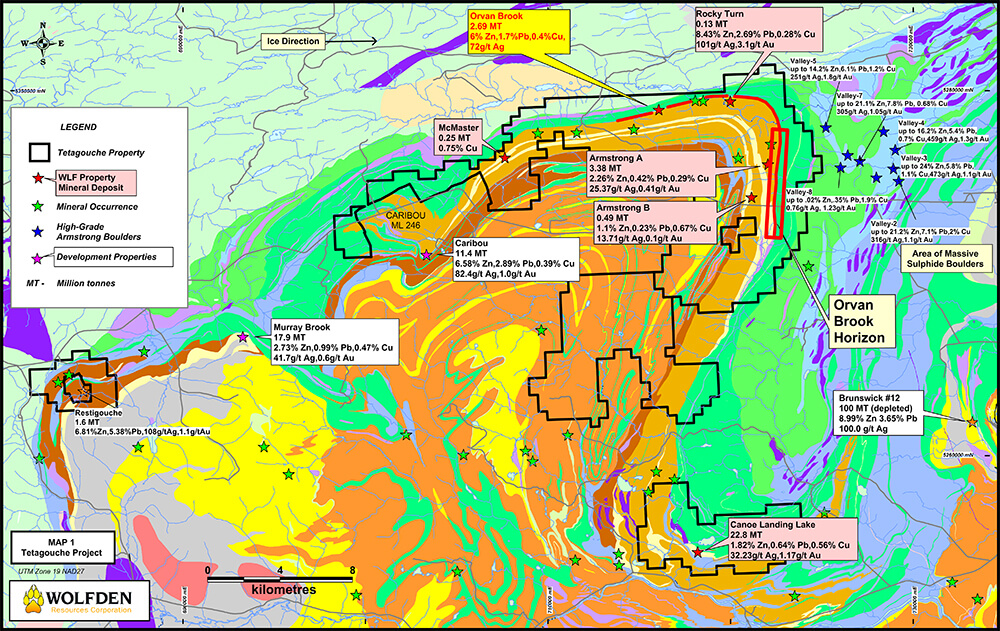 Wolfden recently acquired the Orvan Brook deposit by staking Claim 7904. Historical resources for the deposit (non-compliant with NI-43-101 guidelines) are documented at 2,687,200 tonnes grading 1.73% Pb, 5.95% Zn, 0.37% Cu and 72 g/t Ag. Since acquiring the deposit, Wolfden has completed 21 drill holes testing both the East and West Lenses of the massive sulphide deposit. The widths and grades encountered in these drill holes are comparable to those at the Caribou mine and are suggestive of the existence of an economically significant massive sulphide deposit. Both the East and West Lenses remain open along strike and at depth and warrant further drilling for potential resource expansion.

A prime target area is along the north-south striking mafic/felsic volcanic contact situated to the east of the Armstrong A deposit. This contact represents a continuation of the Orvan Brook massive sulphide horizon. Despite the presence of numerous conductors along this favorable horizon, it has only been tested by a few holes that date back to the 1950’s. In order to further evaluate the VMS potential of this horizon, till geochemical and gravity surveys are proposed to discriminate conductive zones that may be attributed to massive sulphide mineralization, followed by testing favourable targets by trenching and/or diamond drilling. 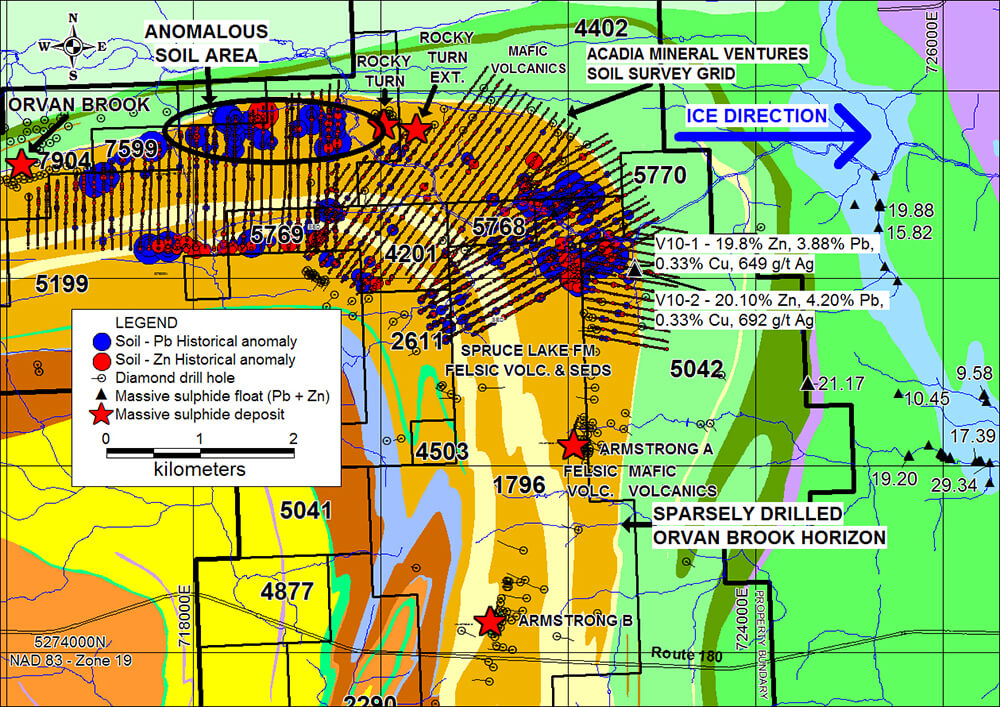 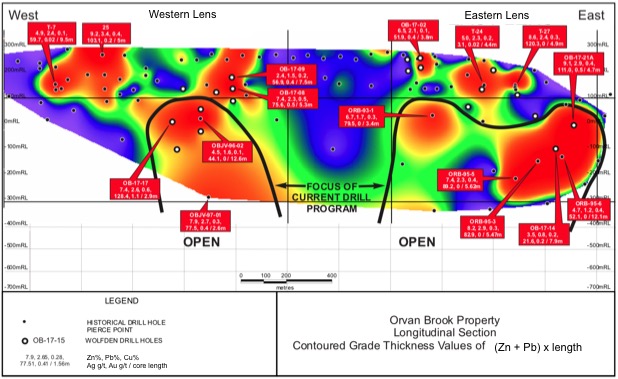 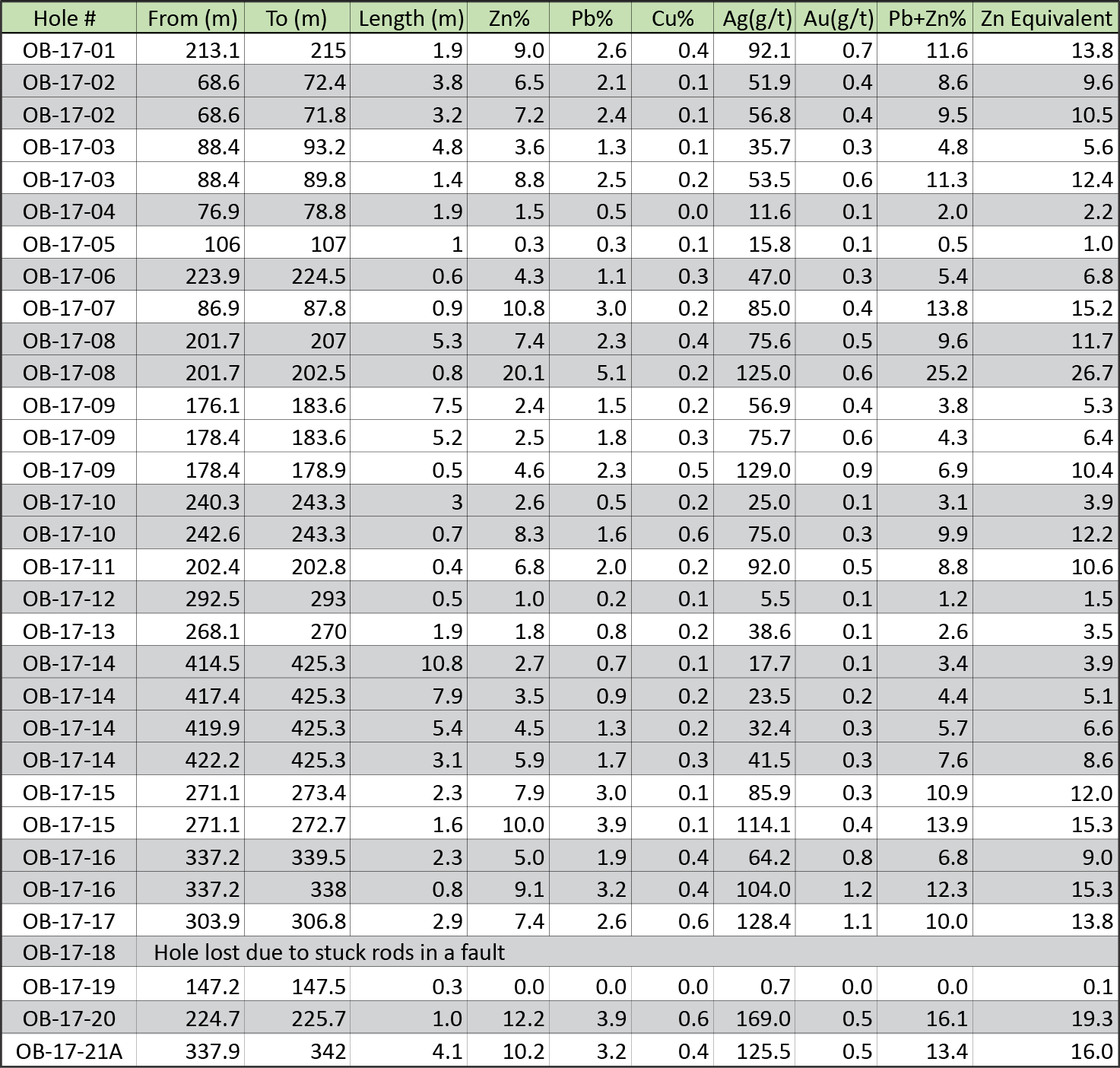